So the Bière de Garde is indeed a bit phenolic, but interestingly not in the nose, but in the finish. There is sort of a hot boozy finish I hope will mellow as this beer sits. The black bière which I'm calling a Belgian-style Porter (as the hoppiness failed to show up) has turned out very nice....for a porter. My calculations in Beersmith for this beer showed had it getting most of its IBUs from late steeped additions and these IBUs simply did not materialize.

About 20 days ago I brewed a hoppy red ale for the Christmas that is my take on the classic Rogue Santa's Private Reserve recipe. I was able to get Bairds malt for awhile but I haven't been able to find in less than bulk amounts so this recipe is not as much of a clone as it used to be, but it's still Munich and three different degrees of crystal malt. I've been using Wyeast 1318 for this recipe as long as I can remember except for on time I used Wyeast 1332 which I believe is from Hale's (not Rogue.) I've never been able to get my hands on PacMan yeast. The recipe is below. I did not make a starter and pitched the Wyeast 1318 directly into the wort. I fermented at 66F and raised the temp to 72 after five days and then let it set at roome temperature after that (which was about 74 degrees.)

So I bottled the beer above this evening and the hoppiness was on point. Lots of sediment resulted in only 20 22-ounce bottles being filled. My bottle filler clogged on me towards the end (the kind with spring inside) so I filled the last three bottles direct from bottling bucket spigot. I have to remember not to give those ones away.

I have three batches from the last few months in bottles right now. The hoppy red, the blonde Bière de Garde and the porter. I'd like to brew maybe something dark and low in ABV like a mild or Irish stout next but I'll need to move some beer into storage.
Posted by Marc at 8:00 PM No comments:

I've opened an unlabeled bottle of my homebrew and I'm not sure what it's supposed to be. I thought it was going to be a bottle of my Belgian-style Black IPA, but it's not dark enough and not hoppy enough. It's almost tastes like the pseudo-bock I brewed several months ago or maybe the dunkelweizen? It does taste kind of like a dunkelweizen and has a lot of carbonation. After all these years I still need to be better at labeling my beer. 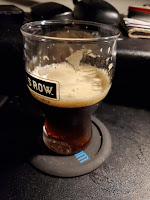 Yesterday I botteld the Biere de Garde and it wasn't a phenol bomb. Phenolic? Yes, but should still be drinkable and the sample from the bottling bucket didn't give me a headache.

Tonight I'm brewing a hoppy red ale most closely matching the English Strong Bitter category. It's an old school red ale along the lines of Rogue St. Rogue Red with three different crystal malts and Munich malt along with Chinook and Centennial hops.