Well today was a big day in the history of my homebrewing hobby.

I bought an electric brew kettle last week and after a test run last night of plain water, I decided to brew today. The electric brew kettle is a a Gigawort from Northern Brewer, a four-gallon kettle that operates at 600W and 1600W. The lower setting is used to hold temps while the higher setting is used to keep a rolling (and I do mean rolling) boil going. I chose to brew a dunkleweizen since I haven't brewed that style before (or maybe I did once a long, long time ago.) The recipe was simple: the Brewer's Best Dunkleweizen kit with wheat DME used in place of the maltodextrin.

Although I'm happy to no longer be brewing on the stove, the Gigawort is not without it's problems. Perhaps problems is too strong of a word. It's a finicky unit. The Brewer's Best kit included two cans of LME and it seems to stick to the "run dry" sensor at the bottom of the kettle which caused the temperature controller to register and E4 condition. This E4 error shuts down the heating elements and requires the brewer to push a reset switch underneath the unit, a maneuver that is a bit tedious with the kettle full of hot wort. I had to reset the Gigawort three times before it was able to keep a roiling boil. I also had to shutdown the unit once to prevent a boil over. Despite these issues I was able to complete the boil and cool with my copper immersion chiller. The chilling took about an hour to get the wort down to 63 degrees. I pitched White Labs WLP 300 Hefeweizen yeast and wanted to do a cool ferment at 66 degrees (accomplished using a Brew Jacket) to bring out more of the clove than banana esters. I did not use the dry yeast that came with the kit.

A little more about the Gigawort: it took quite a bit of work to get the bulkhead attached to the kettle. I'm not a very good plumber though, so your mileage may vary. Also, when brewing partial mash beers I will probably stick to using only DME and not LME as I think it would less inclined to stick to the bottom and trigger the "run dry" sensor. One very nice thing about the Gigawort as that it fits under my counter in on of my kitchen cabinets. 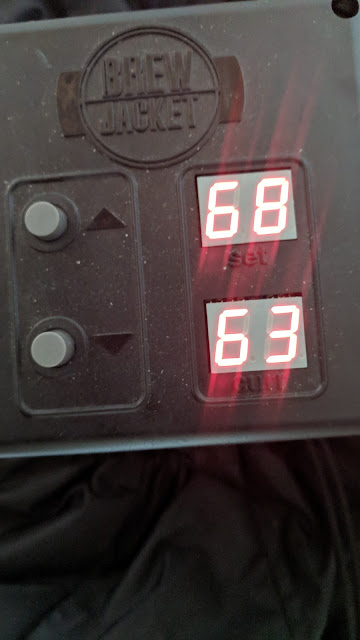 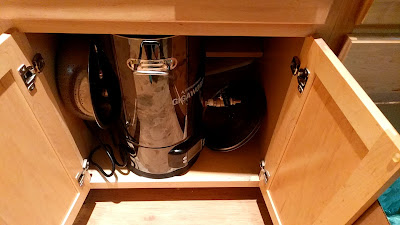 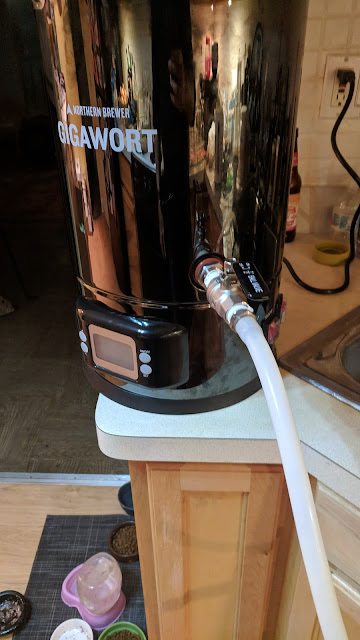 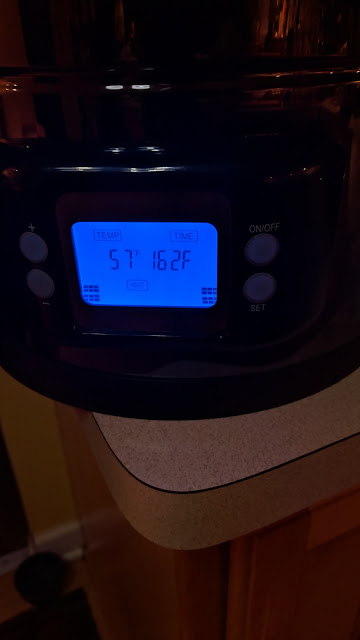 Bottled the pale ale. Pretty hoppy stuff, but not terribly bitter. There are lots of piney and earthy hops along with a sort of sticky bitterness that coats the tongue. The beer spent just a few hours with the dry hops because I realized that I needed to bottle tonight or I wouldn't be able to bottle until sometime next week. I'm quite pleased with the beer so far, but I wish I had more time to dry hop. Not sure my quick infusion will impart anything.
Posted by Marc at 8:36 PM No comments:

Brewed again today. I'm on a roll. Driving back home from Matton, Illinois, I stopped at Friar Tuck in Savoy, south Champaign-Urbana. Friary Tuck sells homebrew supplies, so I picked up a Brewer's Best Pale Ale kit, but I substituted the included hops (Lemon Drop and Citra) with Falconer's Flight 7c's. I added one ounce in the boil for 60 minutes and steeped another ounce. I have yet another ounce that I will dry hop with for two days after the initial primary fermentation. I pitched US-05 yeast which so far is fermenting at about 72 degrees F. For those wondering, the Brewer's Best Pale Ale kit includes two cans of pale malt extract and one pound of CaraRed malt (along with aforementioned hops.) The measured gravity was 1.050 and a calculated 38 IBUs.
Posted by Marc at 10:59 PM No comments:

So I ended up pitching the Wyeast 3711 dregs that I had in my fridge and that woke up the beer from its stuck fermentation. Yes, I had a stuck fermentation with beer at 1.022 after two weeks. I know the Dupont strain is notoriously slow below 90 degrees F, but it's going to start getting even cooler here soon, so I decided to pitch a helper yeast....and help it did! The airlock started bubbling and stayed that way for about three days. I let it go another week before deciding to bottle tonight. I thought about racking to let it sit a bit longer and mature, but I'm having surgery tomorrow and just wanted it bottled up and in case I have a slow recovery. I tasted just a small bit of beer (no hops before surgery) and I was surprised at the lack of heat considering that I added three tablespoons of crushed black pepper. Perhaps the heat will come out more in the finished product.
Posted by Marc at 9:03 PM No comments:

This poor, neglected blog....I have been brewing again and I've brewed a few beers since January(!) including my annual fresh hop English Strong Bitter, a Black IPA and two saisons. The English Strong Bitter was made with fresh Chinook hops from my friend Eric Keeley, it was a good batch and went quickly. I used some of the same hops for the Belgian Black IPA with Wyeast 3711, along with some Simcoe Cryo hops. It was my first time using Cryo Hops and I was very impressed. I was told that this was one of my best beers. Following that batch I brewed a recipe I call Japanese Sunshine. I use Sorachi Ace hops from Japan, Belgian pale malt extract from Willliam's Brewing and rice solids. I fermented this batch with Wyeast 3711. I have only one bottle of this batch left. I have a beer currently in the fermenter. The recipe riffs off of Japanese Sunshine. I replaced the rice solids with a William's liquid malt extract that is 70 percent two-row barley and 30-percent corn. I replaced the Sorachi ace hops with Polish Lubelski and then I got wild and added lemon and sweet orange peel and fermented it with Wyeast 3724. I wasn't sure of the age of yeast but I used it anyways and it seems to be stuck, so I'm deciding what other yeast I might want to add to get it finish. I still have 3711 dregs so I might use that, but I'm tempted to add the dregs form a Jolly Pumpkin Bam Biere. I've done that before with pretty spectacular results.
Posted by Marc at 6:52 PM No comments:

Brewed another batch with Wyeast 3522 today. Fermentables included Six pounds of Munton's DME with a pound of Briess Prinz Black malt, a pound of liquid extra dark candi syrup, a half pound of flaked barley and a half pound of torrefied wheat. I boiled about four ounces of whole Chinook hops for 60 minutes. I added no other hops. I have an ounce of Simcoe Cryohops for dry hopping. It may already be obvious that I'm going for a Belgian Black IPA. Fermenter temp is 68F to 72F. Pitched cool at about 68 degrees. The water going through the chiller was 50F. Fairly warm today for January (about 50 degrees) but temperatures are forecast to drop off substantially into the teens or colder this week so should be able to keep the temperature of the wort under 75. I haven't made a really dark beer in a long time so I'm a bit anxious!
Posted by Marc at 7:57 PM No comments: