A stop at Short's (at last) 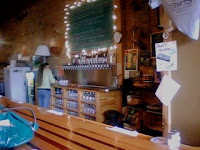 I had the good fortune this past week to visit Short's Brewing Co. in Bellaire, Michigan. I've been pining to visit them ever since sampling their beers (Nicie Spicie, Chocolate Wheat and Huma-Lupa-Licious IPA) at the Real Ale Festival in Chicago several years ago. I've had some Short's since then; sampling Nicie Spicie in Holland at Butch's a couple summers ago, but traveling to the source and getting direct access to the dozens of beers Short's produces was so exciting that I think I had anxiety attack.

The sheer breadth and diversity of Short's beers are amazing. Suffice to say we took home a six-pack of Bellaire Brown (possibly one of the best brown ales I've ever had) along with a limited edition bottle of Bloody Beer; a "specialty beer" fermented with Roma tomatoes and spiced with tellicherry peppercorns, celery seed, fresh horseradish and dill. I'm really looking forward to trying it; I imagine something like the marriage of a Bloody Mary and a good all-malt beer. A fellow patron at the bar described as awesome. Some of the other far-out limited edition creations we could choose from included Peaches and Creme (a strong blonde ale brewed with peaches and lactose, Ginger in the Rye (a strong rye ale aged on ginger and The Woodmaster (a strong brown ale fermented with maple syrup and toasted pecans.) Pretty interesting concoctions and based on reviews at Beer Advocate the extreme beers of Short's are gaining notoriety.

This, of course, is not to say that the regular offerings of Short's are not worthy; they are in fact quite good. I still love Nicie Spicie which the brewer describes as a "Northern Michigan spiced wheat ale" made with "a 50 percent mixture of premium two-row malted barley and malted white wheat ... loaded with fresh citrus zest, coriander, and a four pepper blend." The beer ends up in the glass with a citrus (orange) nose, a refreshing wheat middle and a peppery (but not hot) finish. I also appreciated the Pandemonium Pale Ale for having an excellent hoppiness without being as strong as an IPA (less then five percent alcohol), while the Bellaire Brown, which the brewer describes as a "gateway beer" is really an outstanding complex brown ale that any level of beer drinker should appreciate. The toasted, caramel and chocolate flavors of this brown ale blend exceptionally well with the hops and yeast. 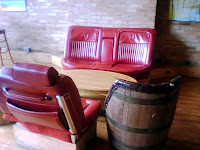 The brewpub itself is pretty interesting, too. It's in an old brick building in Northern Michigan and is full of local art work (mostly paintings) and interesting places to sit -- such as the red seats out of a 1970s Cadillac automobile. The brewpub is separated into two sections: there is a bar area and a music room with perhaps the deepest, narrowest stage I've ever seen. The beer is served in pints and samplers (a paddle) of five beers. In our case we ordered two five-beer samplers so we had 10 different beers to sample. Six-packs and limited edition bottles are available for sale and growlers are filled, too. The food is great, as well, especially the spicy Thai Carrot Soup which my wife thought was the best soup ever. (I concur that it was pretty damn good.) Other food including sandwiches and pizza is available along with unique snacks such as Briess Malted Milk Balls -- which I really wish I would have tried and probably would have paired well with the Bellaire Brown Ale.

Short's Brewing Co. is not too far from Traverse City and in the middle of an awesome Chain-of-Lakes district. It's off the beaten path, but well worth the visit.
Posted by Marc at 9:47 PM 1 comment: