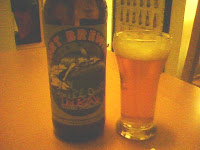 I've been meaning to get to this beer for awhile now. I remember being captivated by it the now defunct Real Ale Fest in Chicago several years ago. Lots of fruity hops in this orange-ish ale. Bits of grapefruit, mango, bitter orange in the aroma of this beer. You can taste of these hoppy qualities, too. The bitterness is potent, and balanced with just enough pale malts and no doubt some dextrin malt to keep the hops from making this beer unbearably bitter. No caramel malt or other malt flavors are noticeable. I've read about some carbonation problems with the beer, but I thought the carb was perfect. The beer poured with plenty of carbonation and a fairly persistent head. Overall, a very delicious IPA that I would definitely revisit and recommend.
Posted by Marc at 9:09 PM No comments:

One beer racked and another brewed

Phew...I'm tired. I got right to brewing after work today. My target is another simple English Bitter, hopefully improving slightly on the last, using the Wyeast 1469 West Yorkshire. This was a simple recipe: one can of Munton's Light, two pounds of Munton's Dry Malt Extract, 1 ounce of Amarillo hops for 60 minutes, a half-ounce for 30 minutes and a three-quarters of an ounce mix of Fuggle and Styrians steeped at the end of the boil. All the hops were pellets. Added Irish Moss for clarity at 15 minutes to the end of the boil. I experienced a minor boil over, but the bigger problem was when my wort chiller came apart. Fortunately, I was able to make repairs to the chiller. Cleaning up all the water on the floor wasn't too much fun, but at least none of the chiller water got into the wort.

I've also forgotten to report that I brewed the Northern Brewer Barleywine back two weeks ago. I racked this batch into the secondary tonight so I could use the primary for the bitter. I didn't reuse the yeast because I figured I already used it once, it was tainted with a lot of hops. I pitched fresh Wyeast 1469 for the bitter. The barleywine tasted deliciously strong with a fair amount bit of a banana aroma -- some interesting esters for sure. I figure I'll let the barleywine sit in the secondary for at least a couple weeks before bottling.

Changes to the bitter (compared to the last batch) included substituting Munton's light DME for the sugar and changing up the hop schedule; using some American hops for bittering instead of all English.
Posted by Marc at 10:02 PM No comments:

It's amazing to me how homebrew gets tucked away and sort of forgotten. This is the case with a beer I brewed back in August 2006 that I initially referred to as the Kitty Kat beer. My inspiration for the batch was Jolly Pumpkin La Roja, but the recipe evolved into something a bit different, with a much more spiced (and different) flavor than the JP brew. This beer was brewed fairly strong at an estimated 7 to 8 percent alcohol. I used an odd combination of spices for the batch; cardamom, fenugreek and black pepper. The full recipe is available here as a Promash summary.

Anyhow, I remember this beer having a really strong maple-like flavor from the fenugreek. Granted, I expected a maple-like flavor from this spice, but I seemed to miss the mark and added too much. It was almost undrinkable. It mellowed about a year after bottling to the point where this flavor wasn't as strong. Now, about two and a half years later, this beer has finally become more balanced and complex.

The fenugreek is still present in the nose mixed with a bit of booziness/alcohol and a dusty cola-like aroma of cardamom. The fenugreek is still the dominant flavor up front, along with caramel, but then caramel malt flavors fade into a tamarind-like fruity-tartness, then back to sweet caramel flavor that evaporates into a dry finish with a latent hint of pancake syrup on the back of the tongue. Pretty weird, I know, but it's good in small doses and it works quite well with Indian food as fenugreek is a common spice used in that cuisine.
Posted by Marc at 6:22 PM No comments: 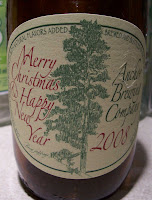 Anchor Our Special Ale is another one of my favorite Christmas/Holiday beers, but I never know what to make out of it. I suppose that's the idea.

Anchor Our Special Ale pours rather dark, almost opaque (just some ruby highlights here and there), but what kind of dark beer is it. Is it a porter? It can certainly be considered a spiced ale. The addition of spices, many different kinds which supposedly change every year) are what makes this beer so special. So is it a spiced porter perhaps? Let's examine the possibilities...

First off, this ale has a very pleasant aroma (it always does). Spruce comes to mind, along with cocoa and there's maybe a hint leather. A very interesting combination, for sure. Aside from the aroma, my first impression of this year's batch of Our Special Ale is that it's not the brewery's best vintage. The mouthfeel is decent, but body the seems a bit light. Also, the flavors aren't as bright as I'd like them to be: black tea-like flavors mixed with raisins, followed by a tamarind-like tartness. This tart character is probably the most interesting aspect of this ale, aside from the aroma. The tamarind flavor sort of builds in intensity with each sip, as this year's batch of Our Special Ale starts to grow on me.

So is this beer a spiced porter? Maybe, but it would be dryish one. I would still stay it defies categorization. It is definitely an interesting ale, but I would suggest that newcomers try a single bottle or draft before committing to a six-pack.
Posted by Marc at 9:11 PM No comments:

Last night I cracked open a "tester" bottle (half-liter swingtop) of my last batch of homebrew and I'm pretty pleased with how it carbonated in the last week or so. I'm a bit concerned with the level of bitterness; it's fantastic right now, but I'm wondering if it might fade with time. I guess this shouldn't really be a concern as this 20-pint batch will go rather quickly. The Wyeast West Yorkshire Ale yeast that I used seems to have worked out; it seems to have contributed some fruity esters while keeping the balance relatively full. I think the blend of toasted and crystal malts in this batch worked well, too, but I'm reserving final judgment until I tap the Party Pig of this beer. Here's the recipe, if anyone is interested. Naysayers will say that it can't be any good because I've used dry malt extract, but I think DME and specialty grains can make pretty tasty beer.
Posted by Marc at 9:15 PM 1 comment: