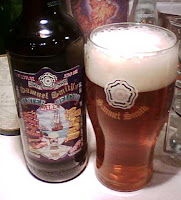 There are so many Christmas and special winter beers to choose from this year, but I seem to be sticking with the classics, such as Samuel Smith's Winter Welcome.

I was delighted to see this ale packaged in a brown bottle this year. (No more skunked Winter Welcome!) The next aspect of this beer that I notice is that it seems much more carbonated than I recall. It pours a remarkably clear amber-orange with lots of "streamers" and a huge amount of foam that settles slowly leaving some sticky bits of lace down the sides of the glass. The first sniff is very fruity; I'm thinking marmalade and maybe the tiniest bit of cinnamon and nutmeg. The flavors are sweet caramel malt along with marmalade, followed by a fresh cookie or biscuit character. The mouthfeel is silky smooth with the body slightly full up front with a dryish, slightly tart, delicate finish with a hint of minerals. Samuel Smith's Winter Welcome is a fine, fresh English Ale that is quite sessionable. I'm going to need to get myself more before it's gone until next year. The label of this beer changes a little bit each year, which is one of things that I anticipate about it, too.
Posted by Marc at 8:01 PM No comments: 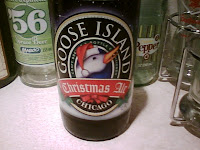 It's Christmas and therefore time for Christmas Ale, in this case, Goose Christmas Ale. The label of this beer purports that you can cellar it for five years, so last year I stashed a six-pack for tasting the next Christmas and here we are...the wait is over!

This 2007 Goose Christmas Ale pours a dark red to brown hue with plenty of carbonation that forms thick off-white foam.The first sip is exceptionally smooth, silky smooth, with flavors of candied fruits. Lacework is left behind down the sides of my goblet as the head falls.The sweet caramel malt flavors are mixed with notes of toasted marshmallow balanced well with hops that offer up just a hint of spiciness. The body is medium and the finish is fairly short, dry and a bit tannic. The tannin seems to subside after a few sips, increasing the enjoyment of this ale. I may have one or two more of these this winter, but I'd like to see how the rest age. This bottle has certainly aged gracefully as a delicious winter warmer.

Next I crack open this year's Goose Christmas Ale. It's just as soft as the 2007 edition, but with a little harsher bitterness and less complexity. Perhaps some age will improve the character. It's not bad mind you, just not as good as the '07. There's a slight hint of papery oxidation which has me concerned about cellaring this year's batch. I guess I'll cross my fingers and hope for the best.

I also picked up a 2008 Anchor Our Special Ale today, but as I've already had a half two Christmas Ales and half a bottle of wine, my notes on this beer will have to wait. It's a favorite though, so I'm eager to pop the cap on it.
Posted by Marc at 8:16 PM No comments:

A bit bitter about not bottling Yorkshire Bitter

December is a busy month for me because I work in retail. As a result, I haven't had time to post much in the last few weeks. I did get the chance to brew recently and I'm waiting for time to package up what's been fermenting in my closet. This was another small batch (3.5 gallons) that comprised two pounds of Munton's DME, three-quarters pound of organic Turbinado sugar, a half pound of Victory malt, six ounces of crystal malt and a quarter pound each of Crystal 10L and 150L. I added an ounce of East Kent Goldings pellets at 15 minutes into the 60-minute boil and a combination of Fuggle and Styrians at the end of the boil (haf ounce each.) I pitched one Activator pack of Wyeast 1469 West Yorkshire after cooling with my immersion wort chiller. I also added Burton Water Salts at the start of the boil. I'm hoping for a bitter with a decent amount of complexity with good mouthfeel up front and a dry, bitter finish. It's been in the plastic fermenter 10 days (some would say way too long) and I need to get racked our packaged. I might not have time for this until Christmas, so my fingers are crossed on this one.
Posted by Marc at 9:41 PM No comments: 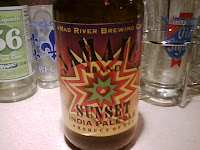 Last month I went on a Michigan beer tour, stopping at a few different breweries and pubs, as well as Siciliano's Market in Grand Rapids. I picked up a few special Michigan beers, chief among them some Founders Backwoods Bastard and the Petoskey Pale Ale I've written about below.

What I also picked up at Siciliano's were some Mad River brews that I haven't seen in a long time that seem to be unavailable in the Chicago area where I live. I remembered Mad River from craft beer boom of the early-1990s. The Mad River Brewing Company opened in Blue Lake, California back in 1989. As you can see on their website, is still going strong and prides itself on achieving a 98 percent reduction in waste, which is pretty cool. I recalled the Mad River Jamaica Brand Red Ale as one of the first real hoppy West Coast beers I ever tried. This got me wondering if it would still seem hoppy to me about 17 years after first trying it. I ended up picking up two Mad River brews, the Jamaica Red and Sunset India Pale.

I opened up the Jamaica Red a couple weeks ago and dashed off a review on Beer Advocate and tonight I'm enjoying the Sunset India Pale Ale this evening. As you can see in the BA review, I was a little disappointed with the condition of the Jamaica Red, but the brewery is redeeming itself with its IPA. It's a hazy amber IPA that has an aroma full of citrus and it tastes very citrusy, too. Grapefruit is a big flavor is this beer, so those of you who like that flavor in their IPAs should like this one. The bitterness is very smooth and could be considered somewhat restrained for an IPA, but since the rest of the beer is hoppy (plenty of hoppy aroma and flavor) the lack of powerful bitter finish can be forgiven. Hints of tropical fruit flavors such as guava and mango show up a bit as the beer warms up which add to the complexity. The carbonation level of this beer has me concerned at first (it didn't pour with much foam) but overall this is a tasty IPA that I would definitely drink again.
Posted by Marc at 7:39 PM No comments:

Enjoying a red ale tonight that I brewed back in February. It's unbelievable how fresh it still tastes. Granted, it's spend most of those nine months or so at about 65 degrees. Thanks Ryan, for use of your cellar, er, basement!

This red ale that I'm enjoying has an almost cedar-like hop character that mixes well with the dark caramel malts that I used which add a hint of roasted coffee in the nose. The flavor is perfectly hoppy and bitter with a bit of hard candy sweetness: just delicious! I think I'm making the recipe my house beer for the cooler months. The recipe is pretty simple: light dry malt extract, 150L British crystal malt, 80L British crystal malt and Amarillo hops added at the start of the 60-minute boil, at a half hour and 15 minutes to the end of boil with an ounce steeped in the kettle with the heat off at the end. I recently brewed this recipe again and after a couple weeks in bottles it's good, but not quite as good as this old batch I'm sampling from February 2008. Perhaps the new batch just needs to mellow.
Posted by Marc at 9:00 PM No comments: