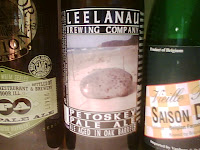 There's something magical about beer fermented and aged in wood. Rocks, are cool, too. I've had German stein bier before in which hot stones are used to push the unfermented beer to boiling, causing the sugars to caramelize on the rocks. These rocks are then cooled and added to teh fermenting beer. The stein bier or "stone beer" that I remember drinking was the Rauchenfelser Steinbrau.

I recently found another stone beer. The beer is Petoskey Pale Ale from Leelanau Brewing Co. The stones in this beer weren't heated up, but added to the beer during fermentation and aging in a large oak barrel. Another unique aspect of this beer is that it was fermented with Petoskey stones. These interesting rocks, composed of fossilized coral used to be found on beaches in the northeast lower peninsula of Michigan. I used to comb Lake Michigan beaches as a kid trying to find Petoskey stone. They would be hard to find if they dry, because they just look like a smooth gray stone. However, if the stone was wet or polished it would show the markings of the fossilized coral.

I never dreamed I would find a beer made with Petoskey stones. I expected an earthy tasting beer or at least of a hint of minerals. I don't know that the Petoskey stones added that much flavor, but the beer did taste rather complex. It had a beautiful rocky head, too. The Petoskey Pale Ale in my glass was a cloudy amber ale and smelled of tropical fruit with a bit of fresh yeastiness mixed with earthy and spicy hops. Some faint traces of spices such as cinnamon and allspice emerged as the beer warmed up. The finish was pleasant; slightly tart and just a touch bitter.

I found the Petoskey Pale Ale at Siciliano's in Grand Rapids, Michigan. It was a great place for beer and must visit for beer lovers as myself and other members of Beer Advocate suggest. All the beers were priced individually and the Petoskey wasn't cheap: about $10 for 16-ounce bottle, but I just couldn't pass up a Petoskey stone beer.
Posted by Marc at 9:19 PM No comments:

The red ale I wrote about in my last post has been bottled. It was another three-gallon batch. I filled 14 22-ounce bottles, 1 Grolsch swingtop and a large 1-liter swingtop. The red ale tasted great. It has a decent hop aroma, sweet caramel flavors with just a hint of roasted grains a lightly hoppy middle and long hoppy, smooth bitter finish. Citric hoppy flavors and bitterness builds with each sip. The body is fairly light; the batch attenuated well. Assuming the bottle conditioning goes well, I may need to brew another batch of the stuff. Meanwhile, the blond American bitter in my Party Pig has smoothed out a bit. I suppose some lagering has occurred, even in the last week or so. It tastes much better, but it is still lacking the toasted malt flavor of the previous batch.
Posted by Marc at 9:12 PM No comments: 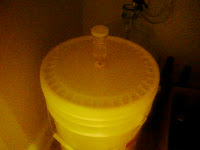 I've got another batch of beer going. This time it's a three-gallon batch of red ale that should almost fit into the IPA category. (It's an estimated 53 IBUs.) I copied a recipe from last year: three and a half pounds of light dry malt extract, a quarter pound each of 135-150L and 70-80L British crystal malt along with a half ounce of 7 percent alpha acid Amarillo pellet hops, another half-ounce of these same hops at 30 minutes and a full ounce at 15 minutes left in the boil. I cooled this with my immersion wort chiller and pitched one packet of Safale S-04 yeast. I brewed this up last Sunday and I'm planning on packaging the whole batch in 22-ounce bottles later this week, although I'm contemplating dry hopping.

Meanwhile, my recent batch of Americanized bitter is pouring from the pig, but it isn't as toasty tasting as the last batch. I'm not sure what happened. The beer is plenty bitter, but just doesn't have the toasted malt character that I like. Perhaps my grist was poor or maybe I just over hopped it. It's hoppy and bitter, but otherwise a bit two-dimensional: just fruity Simcoe hops and sweet malt. I'm not sure I like the Simcoe hops and will probably go back to Amarillo the next time I brew.
Posted by Marc at 9:56 PM No comments: