My good friends Ryan and Erika went to New England for their honeymoon. Erika's not much of a beer drinker, but she let her new hubby visit the famed Monk's Cafe in Philadelphia and got go to a beer festival, too! You can learn about their beer-y fun honeymoon here.

For whatever reason, you may have had to cut down on your beer drinking. Perhaps your boss/liver/sponsor/spouse told you to. Perhaps you have to take medication and you actually want it to work. If you have had to escort your drinking days politely to the door, but miss them terribly, you know how hard it is to watch people waste precious time on bad beer.

I only drink once in a while now, and when I do, I want it to be special. A few posts ago, I wrote about Coney Island Lager, from Shmaltz Brewing. Not only was this an awesome beer, but proceeds from the sale of the beer go to Coney Island USA, which is devoted to keeping lost forms of popular arts and culture alive and preserving New York’s historic Coney Island neighborhood. I knew that Shmaltz made other beers, and I wondered if I would ever see them here in the Midwest. 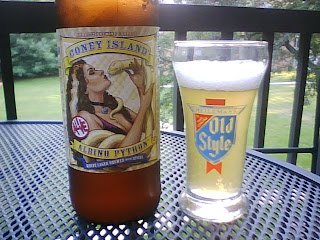 This weekend, I found more Coneys at my local liquor establishment. Albino Python is a white lager spiced with ginger, fennel, orange peel, and coriander. I am not normally a wit fan (as I have a low tolerance for orange peel), but this beer balanced the spices with a nice hop background. I especially tasted the ginger and fennel. Sword Swallower is a hoppy lager with eight hops and four malts and weighs in a 6.8 percent ABV. This one is just as strong as one would need it to be, with the alcohol not even making much of an impact until you've appreciated how finely this beer is crafted. 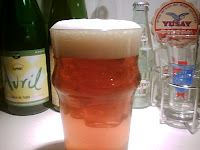 I'm a fan of what is called "session beer" which is typically defined as a beer which the average beer drinker can consume over a long period of time without getting drunk. When I think of session beer, I think of English Bitter.

According to British writer Roger Protz, Bitter is "an English term for a well-hopped draught ale that is typically copper-coloured with ruddy glints and a slight but distinctive bitter taste that is unspoilt by the fizziness of CO2. It is unrealistic to expect the so-called bitter that is sold in a can to have any semblance of true draught bitter character. Most bitter is 3.75-4% ABV, although Best or Special will be 4-4.75% and some go as high as 5.5%."

I like to brew an Americanized version of Bitter, but tonight I'm sipping a commercial version of true English Bitter called Fuller's London Pride. Fuller's is a distinguished English brewer of ales. Fuller's has been around since 1845. The brewery's website says that London Pride has grown to be Britain's highest selling "Premium" Ale. Fuller's London Pride is a tasty ale that pours a light amber hue with plenty of carbonation (at least out of a can), but is a bit subdued. Although Roger wouldn't approve of this canned beer, this is a decent ale with enough complexity to balance it's excellent drinkability. London Pride starts out with a honey-ish nose accented by woody hops, followed by a delicate biscuit-like maltiness, a hint fruitiness, a slight bit of tartness and finally a crisp, bittersweet finish. Although I'd like to taste more bitter hops in the finish, this is still a decent session ale, and it must be noted that the particular sample I'm enjoying is about three months past it's best before date, which could explain it's lack of luster.

I picked it up for cheap, knowing it was a bit past due. I normally wouldn't consume beer past it's due date, but in this case I succumbed to a case that was more than half off it's normal price. So given this product's condition I'm certainly not too disappointed.
Posted by Marc at 7:37 PM No comments:

I think I'm enjoying one of the geekiest beers out there tonight. This quirky, unusual brew is Dogfish Head Palo Santo Marron. It's a beer aged with Palo Santo wood. According to the brewery's website, "The caramel and vanilla complexity unique to this beer comes from the exotic Paraguayan Palo Santo wood from which these tanks were crafted. Palo Santo means 'holy tree' and it's wood has been used in South American wine-making communities." I heard about this beer a few months ago (I can't remember how or where), but when I went to the Dogfish Head website to look up some more information about it, I found a cool video about the production of this beer. I became more interested in the beer after watching the video and decided I HAD to find a bottle.

So I did, and like I said, I'm enjoying it tonight.

I've been worried that the hype for this beer was too great and that I'd be disappointed, but I'm not. Palo Santo Marron is a magnificent ale. Again, it's a deep dark brown ale that looks pretty good; no voluminous head or huge amounts of lace to speak of, but a solid ring of foam is left behind once the foam dissipates. The aroma is great and what I would expect from a world class strong brown ale. There's lots of candied fruit aromas (figs, plums, along with a little tingle of rummy alcohol in the nostrils.) What's incredible about this beer is the lush mouthfeel (like liquid satin) along with the brown sugar fig-like fruitiness and burnt caramel flavors. As the beer warms up, more leathery notes come forward along with rum-laced coffee with cream character. The finish is just as interesting with a transition from candied fruitiness to a vanilla and coffee liqueur flavor. This is one extremely complex ale.

Overall, an absolutely astounding strong (12 percent alcohol) sweet, brown ale that has got to have a ton of calories. I wouldn't recommend having more than one in a sitting. Not that it's so strong, or too caloric, but that it's rather special.
Posted by Marc at 8:46 PM No comments: 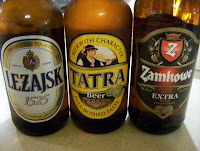 One of my "go to" beers last summer was Radegast (a fine, yet inexpensive Czech lager.) Alas, I have found no Radegast this year. So while at Binny's recently, I thought I'd try some Polish beers that I haven't seen before. I picked up three 500-mL bottes and recorded the following tasting notes last night:

Lezajsk
Very clear, straw pale. Bright, white head rises quickly and falls almost as quickly and cleanly, leaving no lace behind; just a minimal collar of foam. Cereal grains in the nose, along with a subtle, vegetal spiciness. Served a touch too warm. Very light and smooth. Crisp. Late kick of bitter hops in the dry finish. Extremely drinkable stuff and at 5.5 percent it is indeed sessionable. The light body and smooth mouthfeel of Lezajsk easily qualifies it as a summertime quaffer.

Tatra
Clear and straw-colored with a quickly rising head that settles more slowly than the Lezajsk, leaving a little bit of lace behind. Neutral to grainy aroma. A little more malt character and body than Lezajsk. Probably about the same IBUs, but in a stronger beer it tastes like less bitterness. Lacing is in rings now, adding to its good looks. Since the Tatra is stronger, I would describe it as more a winter beer, or given the geography of its namesake, an alpine beer. This is definitely sweeter than Lezajsk.

Zamkowe
Okay, here we have an even stronger straw-colored beer that produces a pretty rocky, white head, that shrinks rather dramatically from all directions. The aroma is slightly talc-like. Very smooth and more than a touch sweet. We're well into dangerous pale bock territory here. The foam on top of this beer is persistent; after a few minutes there's still a quarter-inch of head. Unfortunately, this beer is pretty plain tasting, it has complexity, but it is what it is; a Strong Euro Lager. There's not much here to write home about except lots of malt, hops to balance the sweetness and alcohol. However, the sweetness is twinged with a honeyish character that makes this beer a little more satisfying.

I think the most interesting information I ran across while searching the Internet about some of these beer was this place.
Posted by Marc at 8:14 PM No comments: