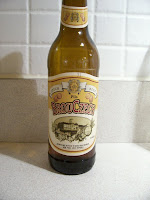 I stumbled upon a very dry Bohemian Pilsner called BrouCzech. I found it at Trader Joe's the other day for around $6 a six-pack. Apparently it's made at the Nova Paka brewery in the Czech Republic. Their seems to be a decent webiste for the beer, but I'm not finding much buzz about the brand elsewhere on the Internet (RateBeer, BA, etc.).

BrouCzech Pilsner is a deep golden, almost amber pils with a really wonderful nose that exhibits a combination of grassy, spicy hops and an almost cinnamon-like aroma of toasted malt. It's a very smooth lager whose Saaz hop character reminds of what Pilsner Urquell used to taste like some years ago. This is a beer that tastes so pure I swear I can taste the minerals in the water the brewery used for brewing. I'm really diggin' this brew this evening. Kudos to the Downers Grove Trader Joe's for stocking this beer!
Posted by Marc at 7:38 PM