This very dark Dark Horse brew pours pitch black and bit shy in the carbonation department. I'm not surprised, as this is one thick brew -- thick and alcoholic -- as I notice that this has "legs" much like a fine wine. The aromas are intense with black currants and dark chocolate along with the suggestion of port wine. The fairly how carbonation keeps this beer smooth as silk, black silk with magnificent cocoa and espresso flavors along with a good smack of hop and roasted grain bitterness. This beer comes across much bigger than it's 7.5 percent alcohol by volume suggests. This is a very delicious black beer that drinks more or less like a Russian Imperial Stout, but the brewery is coy about style, simply calling it a black ale. I like the fact that the brewers didn't feel the need to call this a stout or porter, they simply wanted to make a really dark, black ale and that's what they called it.
Posted by Marc at 8:34 PM No comments:

I felt the urge to post an update on a beer I wrote about in my last post: Heavy Handed IPA from Two Brothers Brewing Co. in Warrenville, Illinois. I happened to find another batch or lot number of this wet-hopped ale. The particular version I found is hopped entirely with Cluster hops.

The Cluster hop version of this beer looks the same; slightly amber color, good bright white foam with good head retention. The aroma is earthy and oddly floral, probably fruiter than the Willamette hopped version that I tasted in my last post. The Cluster version tastes fruiter and sweeter than the Willamette, too, (at least in the middle) with a very late and muted burst of hop bitterness. The hoppiness and bitterness builds in intensity with each sip. A very tasty version of this beer, that I probably appreciate a little more than the Willamette version and I'm not sure why -- possibly because of the earthy and floral (less spicy hops).
Posted by Marc at 8:50 PM No comments: 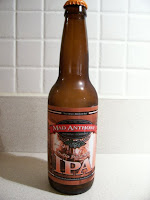 Here we have a beer brought back from Indiana by my friend Ryan called Mad Anthony IPA. It's an orange-hued IPA with not a lot of carbonation, but the initial one-finger or so of head leaves a persistent layer of fine bubbles -- this is a fairly visually appealing ale. The aroma is rather delicate, fruity and mildly hoppy. Frankly, I'm not too impressed with it. Spicy, hoppy flavors that lead to a tangerine-laced finish are interesting, but certainly not over-powering. The bitterness is right for a smaller American-style IPA. Any yeast flavor component seems over-run by the hops. The finish is clean, a touch sweet then bitter. Mad Anthony has a good, clean IPA here and one I wouldn't be afraid to revisit, but not necessarily seek out. 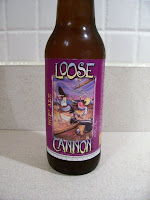 Loose Cannon (Hop3 Ale) is an IPA from Clipper City Brewery in Maryland. This was another brew picked up in Indiana. The Loose Cannon poured pretty nicely with good carbonation and a couple fingers of foam. The head falls pretty quick though, leaving an almost flat looking ale. The fruity (orange?) hop aroma was pretty intense and noticeable a few inches away from my glass. Loose Cannon is a rather sweet and fruity golden-hued ale that seemed a touch too sweet in the finish to be considered an IPA. The body is fairly light, enhancing drinkability, but causes me to lose interest. There was no real hop bite in this beer's finish, just some light spicy hops and sticky sweetness along with the warmth of alcohol, detracting from the enjoyment of this beer. This is one I wouldn't mind giving a second chance, but I wouldn't seek it out. Judging by reviews on Beer Advocate, I'd like to try this one on tap. 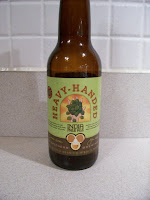 Heavy Handed IPA is third up in this trifecta of extra hoppy ales. Heavy Handed is brewed by Two Brothers Brewing in Warrenville, Illinois. It is a "wet hopped" IPA; meaning it was brewed with fresh hops that were not kilned (dried) before adding them to the beer. Heavy Handed is not exceptionally bitter beer in terms of modern "hop bombs" -- the beer is brewed to a bitterness of 62 IBUs. That said, there is a lot of hop aroma, flavor and lasting bitterness in this amber-hued IPA. It's a pretty beer, too, with white head of foam that settles slowly, leaving some lace down the sides of the glass. The hop aroma is complex; woody, herbal and very pleasant. Spicy, resiny, almost stikcy hops dominate the palate with caramel malt flavors softening the sharpness of the hops. The finish is bitter and rather long and just a touch thick. The mouthfeel is smooth and a touch slick in this full-bodied IPA that is probably the beefiest (least dry) of the bunch. It's definitely worth noting that this beer is produced in different batches each a different hop. The type of hop used can be determined by discerning the lot number from the label. My six-pack was part of lot no. 2547, which was brewed with the Willamette variety of hop.
Posted by Marc at 9:40 PM 1 comment: 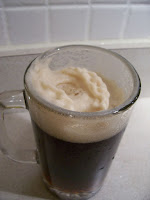 I picked up a sampler pack of Sam Adams the other day that included two each of the Boston Lager, Boston Ale, Brown Ale, Black Lager and Honey Porter and Scotch Ale. I hadn't tasted the Scotch Ale and Honey Porter in years; the inclusion of these two beers in the pack is what really got me interested in it.

Despite my interest in the Scotch Ale and Honey Porter, the Brown Ale was probably my favorite and is pictured. The Scotch Ale seemed to fizzy and thin-bodied with a slight banana-like phenolic character that seemed out of place. I suppose this character came from the use of peated malt, which I've read can add some phenolics. The Honey Porter came across much more like I remembered it. The honey sweetness is an interesting, contrasted with the dark malt flavors of chocolate and roasted coffee. The Black Lager seemed to have more of the roasted coffee character, but was smoother than the porter and less sweet (no honey), so I liked it a touch more than the porter. I certainly wouldn't turn down the porter if it was offered to me. Of course, the Boston Lager had the most hoppy character of all the beers and was very sessionable and very tasty. The Boston Ale wasn't quite as hoppy at first, but the second bottle (served a bit warmer I think) had more of a recognizable English hop character. Nothing outlandish mind you, but a solid enough hop character to balance out the sweetness of the malt and add a woody, slighty resiny hop taste.

Getting back to the beginning and the brown ale: this was the most suprisingly good beer of the pack. Not necessarily the best, but most the surprisingly good. First, it poured beautifully, with a huge rocky head. Next, it delivered a wonderfully complex flavor of pure malt, nuts, chocolate, figs and spicy hops with a creamy mouthfeel. A very sessionable ale that also stimulates the tastebuds. The only caveat attached to tasting this beer is that, to me, it is strictly an autumn brew. I don't really drink brown ales other than in autumn. The flavors that most brown ales offer just seem to suggest autumn - don't know why - but maybe it's because it was the time of year my grandmother would put out bowls of nuts to snack on; filberts, Brazil nuts, almonds and walnuts which are precisely the flavors one can find in a good nutty brown ale.
Posted by Marc at 10:20 PM No comments: