I bottled the Roastaroma Ale (sort of my take on an old Charlie Papazian recipe) yesterday with some decent results. The beer smelled and tasted okay after sitting for 18 days in the secondary. This fermentation was much longer than I intended; other parts of my life got in the way of my homebrewing and frankly, I was a bit scared of what was happening to my beer as it continued to ferment at temperatures between 80 and 83 degrees. I ended up filling 24 22-ounce "bomber" bottles of what could turn out to be an interesting brown ale. Perhaps the only flaw I noticed was a light green apple aroma. This could be something bad like acetaldehyde, but it may also be something that age may subdue. I guess most importantly, the batch appears to be devoid of really obviously nasty off flavors.

In other news, it seems an infection caught up with a saison-style beer I brewed back in late July. This is really disappointing because the beer seemed quite good at first. In fact, I raved about how good it tasted and posted a picture in an earlier blog entry. Lately, the bottles I've been opening have been prone to excessive foaming and I've noticed the tell-tale ring around the neck. I used some of these bottles for my most recent batch, but scrubbed and cleaned them with B-Brite, then rinsed them, then sanitized them with a Iodophor solution. However, the tragedy has already been magnified, as I re-pitched the saison yeast for a cherry ale that I made a few weeks ago and sure enough, many of these bottles have a ring at fill level and some even have a milky looking substance floating on top of the beer. Reading some other blogs and homebrew forums, I'm thinking it's time to get some new siphoning equipment and a new bottling bucket.
Posted by Marc at 7:45 PM No comments:

It's been to damn hot the past few days.

So damn hot I had the taste for some lingering summertime brews, so I tried a couple summer ales from New Belgium Brewing Co. of Durango, Colorado. I picked up single bottles of Mothership Wit and Skinny Dip.

Of course, New Belgium is famous for its Fat Tire Amber Ale, which seems to have a huge cult-like following. I enjoy an occasional Fat Tire Amber, but it's not my favorite brew. That said, I wanted to try a couple of the brewery's other beers and see how they compared. 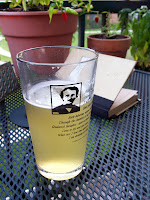 I found the Mothership Wit (pictured to the right) to be an amazingly pale beer, no doubt due in large part to the brewery using large amounts of unmalted wheat as an ingredient. As I marveled at this beer's near Bud Light paleness, I couldn't help but wonder if it would also taste like Bud Light. No, sir. Mothership Wit may be cloudy pale in color, but it is thankfully no Bud Light. It is a refreshing Wit bier with just the right amount of spices and yeasty complexity. Spicy citrus flavors and very light (almost watery) body make for the perfect ale on an 85 degree day. 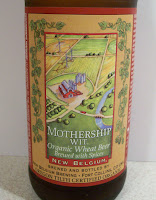 Skinny Dip, on the other hand, came across as a much beefier, full-bodied beer. With an egg white froth of a head and big cascade hop cedar-citrus aroma it is certainly an enticing beer. As the foam subsided, this golden-hued ale was quite picturesque with the head leaving a little bit of lace along the sides of the glass. I very much enjoyed the leafy, hoppy nose, but at first sip the seemed to full and wheaty. Sure some toasted malt character and cascade hop leafiness, but following the Mothership, the Skinny Dip just felt...dare I say, heavy? I enjoyed the leafy Cascade hop flavor, and the slight tartness towards the finish, but coming off the Mothership this beer seemed a little too sweet. Not bad, but a bit too full-bodied for a summer beer. (It was 83 degrees outside -- and almost inside -- as I sipped this beer.)

Overall, I would prefer the Mothership's spiciness over the Skinny Dip's Cascade wheatiness. I remain eager to try more New Belgium beers. I really love the presentation with the intricate label artwork and custom embossed bottles. Clearly, the New Belgium Brewing Co. is trying to sell more than beer, but a lifestyle, especially with it's dedication to cycling and the environment (harnessing wind to power the brewery). Although clearly inspired by Belgium, the New Belgium beers come across much cleaner tasting then the real deal. I continue to wonder if there is a New Belgium brew that brings a little more of the funk that many real Belgian ales offer.
Posted by Marc at 9:42 PM No comments: