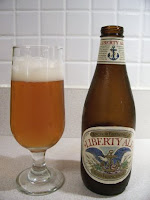 A few weeks ago, the Trader Joe's closest to my house expanded its beer selection. Now I can mix and match among breweries such as Unibroue, Sierre Nevada, Goose Island, Three Floyds, Pyramid, Great Lakes, Dogfish Head and Anchor. I recently made a a little hoppy sampler with some Dogfish Head 60-minute IPA, some Goose Island India Pale Ale and a bottle of Liberty Ale from Anchor Brewing.

First produced in 1975 (I thought as a Christmas beer, but Anchor's website indicates that it was brewed to commemorate the bincentennial of Paul Revere's famous ride), Anchor Liberty is a classic hoppy ale and was THE hoppy ale for quite awhile until other craft brewers started brewing their own hoppy beers. Anchor Liberty was probably my first hoppy, India Pale Ale type of beer and I imagine it's inspired a lot of other craft brewers through the years. Anchor's website makes a big deal about dry-hopping, or adding dry hops to the finished beer. It states that the process is rarely used in this country...well, maybe in the 1970s and 1980s, but I think a lot of craft brewers are using dry hops these days.

I can't remember exactly my first taste of Liberty Ale, but I know it was at The Cafe in Macomb, Ill. I used to think Anchor Liberty had so much hop flavor that a slight green haze was noticeable. I no longer think of Liberty as the hoppiest ale out there, but it is still a contender, with its pine resin scent and hop flavor mixing well with crisp, yet sweet malt. The white, rocky head (as noted in the accompanying picture) is very appealing. It's a pretty simple beer really, but I think sometimes simplicity is what tastes best.
Posted by Marc at 8:31 PM