It's the time of the season for Saison

Last night I decided it was time to rack the Saison. The fermentation lock had quieted down and it didn't want the beer to sit in plastic any longer. I checked the gravity and it fallen about from 1.056 to 1.015, which is an apparent attenuation of only 72 percent. I've witnessed very little fermentation activity so far (maybe a little bubble every few minutes), but I know the yeast working, and will let it have all the time it wants.

I decided that with this batch of Saison I would let the yeast express itself and not add any spices. With this in mind, I tasted the beer out of the primary and was rather impressed. The beer was a very hazy orange color with an aroma that was phenolic at first, but then fruity. I didn't detect anything overtly funky. The taste was mostly a touch sweet up front and rather juicy (a touch too full for the style; not surprising at this at this point), with a very mildy bitter and peppery finish. I'm sure the flavors will change quite a bit in the coming weeks and months.
Posted by Marc at 8:25 PM No comments:

Well the Belgian Pale is acting more like a well-attenuated Biere de Garde these days. I guess you're not going to have Biere de Garde without several weeks of "guarding" or about 10 weeks to be more precise. This beer is finally looking and tasting more like a real Belgian Ale and I'm quite pleased. (I thought it looked darn pretty in my Orval glass pictured below.) It's too bad I've already consumed half the batch! I'm always to eager to start drinking my best beers. At least now I know that I need to be more patient with this recipe; Belgian yeasts work their magic very slowly. Anyhow, this beer definitely has that soft Biere de Garde character with a touch of biscuity-caramel-cookie sort of malt character. I could only be happier if had another case of the stuff. 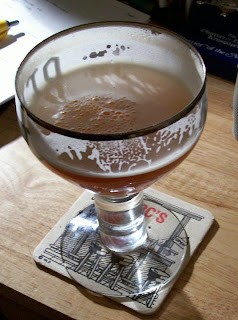 Also, I brewed a Saison-type beer this past weekend. It's a very simple extract-based batch. I used five pounds of Briess Pilsner dry malt extract, three pounds of Pilsner malt, a half pound Belgian Caravienne, two ounces of Kent Goldings, an ounce of Saaz hops and yeast. I didn't use any spices this time. (I usually add spices to my Saisons.) The beer has been fermenting since Sunday and is slowing down in its primary fermentation. I will be racking it out of its plastic into a glass carboy soon. I'm thinking of blending in a bottle of Saison DuPont a few days before bottling time, since I'm sort of modeling this beer on DuPont. I'm really shooting for a well-attenuated, "simply complex" beer with plenty of carbonation. Getting the gravity down low will be the trick and I think adding a bottle of the real thing might do it.

I decided not use the grain bag for this batch of beer and instead mashed the loose grains in a separate pot which I kept warm inside an oven set to warm. "Lautering" was accomplished by literally dumping the grain into a large colander situated over the brew kettle. Sparging was accomplished by ladling the hot sparge water over the grain. I did not recirculate the wort. Once I had I my wort I added the Briess dry extract an ounce of the Kent Goldings pellets, which I added again 30 minutes into the boil. Finally, I added an ounce of Czech Saaz hops in plug form as an aroma hop two minutes before the end of the boil. After cooling the beer with my wort chiller, I pitched an XL pack of Wyeast #3724 Farmhouse Ale, which I hope to repitch into another batch after the secondary fermentation.
Posted by Marc at 9:52 PM No comments: