Bottled the porter last night and I'm pretty pleased. Fermentation started real slow, so I had pitched some slurry from the previous batch (with my fingers crossed, because the last batch didn't turn out so well) and everything seems to be okay. I've been concerned about scratches in the bottom of my fermenter, but this beer seemed to ferment nice and clean, and tasted great right out of the primary. Yield on this batch was 22 22-ounce bottles and two plastic quarts.

Tasted out of the primary, this beer had a chewy caramel and pronounced chocolate flavor, laced with the citric and piney hops. I could also detect a sort of minty-licorice flavor, which I'm guessing may be the juniper berries that I added. Hops are assertive, but not overpowering. Quite happy with this one so far.

The only problem with this batch was that I broke my bottle filler.
Posted by Marc at 7:33 PM 1 comment:

I decided to brew a batch of porter yesterday. I kept it simple and easy, using two 3.3 pound cans of Munton's Amber extract, a half pound each of 120L American crystal malt and Belgian Special B, a pound each of Belgian chocolate malt and Biscuit malt, some left over whole Centennial and Chinook hops (an ounce each) and a vial of White Labs English Ale yeast.

I crushed all the grains myself in a corona-style grain mill. I sort of steeped/mashed the grains with a half ounce of the Centennial hops (sort of a first wort hopping experiment) in a large grain bag in my brew kettle, raising the temperature to about 150 degrees F. and holding it between 140 and 150 for about a half hour. I then added the malt extract and turned the heat up to bring the mixture to boiling. Once I got the boil started I added a half ounce of the Chinook, followed the rest of the Chinook after a half hour. I added the rest of the Centennial hops about five minutes before the end of the boil. It was at this time that I sanitized my wort chiller by letting it sit in the boiling wort for the last five minutes of the boil. I cooled the wort with the chiller in about 20 minutes to about 80 degrees F., poured it through a strainer into my plastic fermenting bucket and topped off with artesian spring water to bring the total volume up to five gallons. I pitched the White Labs vial directly into the wort (no starter) and it was rather messy. The vial seemed to be under quite a bit of pressure, as the yeast and liquid inside sprayed out even though took care to crack the vial slowly and relieve the pressure inside. This has happened to me on a couple occasions now.

I much prefer the Wyeast Activator packs, but particular homebrew shop I visited doesn't sell them. Perhaps I'll be going back to having everything shipped.
Posted by Marc at 11:12 AM 1 comment: 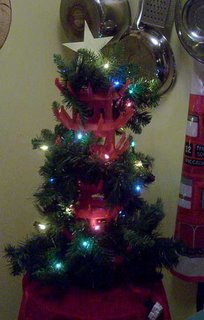 I've been on a bit of a brewing hiatus for the past couple months. The red ale turned out infected and I've been agonizing over what exactly happened for a few weeks now. I've come to the conclusion the batch was infected by either an improperly cleaned and sanitized spigot on my bottling bucket or by adding some old yeast energizer to the beer after boiling.

So, I've taken some time off from brewing, but I intend to get back to it after the holidays. In the meantime...

Happy Holidays!
Posted by Marc at 8:29 PM No comments: