The making of a Balcony Beer 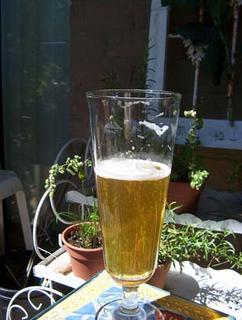 I brewed another batch of spiced summer ale, or what we like to call a "balcony beer" today. A balcony beer is what me and my wife call any beer that is thirst quenching, fresh, crisp, and light (in body and color.) It's good for a balcony beer to be visually appealing, too. The ability to see the sunlight filtered through the beer as bubbles of carbon dioxide percolate up the through the glass to sustain a bright, white, meringue-like foam.

The first batch of the spicy blonde turned out fantastic, even though I experience a stuck sparge. I was aiming even higher with this batch; as I added some more spices and herbs to the mix. Unfortunately, I had a stuck sparge with this batch, too. Seeing that the first batch stuck and turned out great, I probably shouldn't worry about this batch, but the fact that the last batch "stuck" and turned out okay made the situation no less frustrating. At first I was convinced that the problem was due to poorly milled grain; the grain I used from the St. Charles Homebrew Shop had a lot of flour to it. After almost an half hour of sparging the wort into my brew pot with a hand strainer and a ladle, I could see my phalse bottom and didn't see any grains stuck underneath it or in the tubing. So what was the problem? I think I needed more foundation water, as I simply dumped the half the grain in my mash tun (Gott cooler) and then mixed in about a gallon and a half of water. I probably should have added enough water to cover the phalse bottom and then about a pound of grain, instead of six pounds! Everything else about the brewing process was pretty normal, but I was worried the whole time about hot side aeration and a heavily oxidized final product.

Experiencing a stuck sparge again had me wondering if all-grain brewing is worth the trouble, but after cracking open one of my previous all-grain brews (my hoppy summer blonde ale brewed in early July), I was reminded of why it's worth it. (You can see for yourself by looking at the attached picture. The beer even looks good, again proving that it's a good "balcony beer", too.) There is no way that I could produce such a crisp and light ale with extract.
Posted by Marc at 8:03 PM 1 comment:

After almost a month in the bottle, I think the Hoppy Blonde Ale is pretty much what it's going to be. The aroma is slightly malty and estery with a hint of corn, which suggests some problems with DMS. The color is pretty good (a light gold), but and carbonation is pretty much perfect, but the aroma seems a bit off. Although I calculated this beer at 40-something IBUs, the hops seem to be lacking a bit, with the malt asserting itself more than I thought. If I brewed this recipe again, I would probably reduce the amount of CaraPils (dextrine) malt from 15 percent to 10 or maybe even 5 percent. Or, I might leave out the dextrine malt and use a little bit of flaked or torrefied wheat instead. The batch turned out okay, it's just a bit boring.

Meanwhile, I've the got the ingredients together for another batch of the Spicy Blonde Ale, except that I bought White Labs Wit (WLP400) instead the Wyeast Belgian Ardennes. The guy at the brew shop told me that it would ferment fairly clean at high temperatures, but after doing some research about this strain it seems I could end up with a bit of tartness in this brew. I guess I'll experiment and see what happens.
Posted by Marc at 8:37 PM No comments: