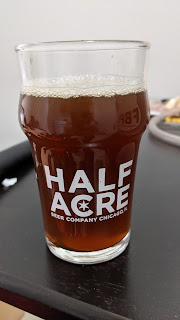 The brown ale has been bottled. It was a bit of a troublesome brew as my Wyeast 1318 packet turned out to be a dud. There was no change in gravity after three days, so I pitched a packet of Safale S-04 that I happened to have on hand in case of emergency. Fermentation kicked off about 24 hours later. The fermentation temperature was 64F for the first five days of and then I raised the temperature to 68F upon noticing that the gravity was stalled at 1.012. Raising the temperature and rousing the yeast seemed to get one more degree of fermentation out of it. I bottled four days later as the gravity did not change. At bottling time the beer was drier than expected. My Tilt hydrometer reported the ABV as 4.46 percent. A very gentle brown ale along the lines of the old formulation for Newcastle (not the current version brewed at Lagunitas.) The Tilt spreadsheet for this recipe (Brewer's Best Brown Ale kit) is here.
Posted by Marc at 11:26 AM No comments: 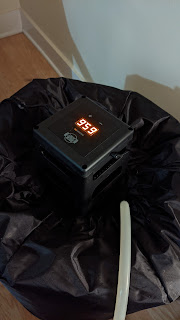 Brewing a brown ale tonight. A British brown ale fermented with Wyeast London Ale III (#1318), a liquid yeast alternative to the Brewer's Best Kit that I bought. Yes, sometimes I just want to brew from a kit. There's nothing really that wrong with the Fermentis S-04 yeast that comes with the kit, but I like the London Ale III as it does well up to 74 degrees and since I'm brewing in a new environment I want a little leeway in terms of temperature. I started renting an apartment for work and play last year and although it has turned out to be more of a work space than I originally intended (thanks coronavirus), I've also decided to move the home brewery. I think my first batch was a brown (isn't everybody's?) and since it feels a bit like starting over, I decided to brew a brown.

Meanwhile, I've cracked open a bottle of the porter that I brewed several months ago and it is still quite good. A fine aroma of toasted malt and chocolate with more chocolate on the palate and surprising dryness. Hops kept very much in check for more of an English-style porter. This porter is just shy of sweet but I quite like it. Not everything needs to be hoppy, but a little bit of a hop nose might have been nice.

Back to the brown: brewing from the kit worked well. I put the grains in the muslin bag that came with the kit and tied it to one of the handles on my Gigawort so it stay off the bottom of the kettle. I feared the the liquid malt extract in the kit might sink to the bottom and trigger the run dry sensor in the Gigawort -- and it did -- even though I killed the heat and let it sit for five minutes. Adding the dry extract went fine and got the kettle going again. Putting the recipe into Beersmith I found it to be a bit too bitter for an English brown so I adjusted the hop schedule, adding the second ounce of Willamette hops at five minutes left in the boil. I also decided to added on piece or one "star" of star anise at the end of the boil for a little complexity. I chilled the wort with my copper immersion chiller and got the wort down into the 60s in about a half hour. I pitched the yeast into 65 degree wort about an hour ago and the temperature of the wort has already risen to 71, so I have my Brewjacket Immersion Pro set to 64 as I'm afraid that the heat produced by fermentation could push the wort temperature above it's recommended maximum of 74. Cloud logging is working with my Tilt so I'll be able to monitor the temperature remotely. I won't be able to adjust the temperature remotely but just knowing what's going on will be comforting. 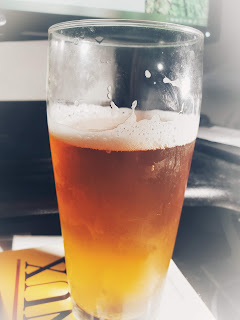 The Wyeast 3725/BE-134 saison has turned out pretty well. I'm a bit impressed with the clarity. Of course I gave beer a careful pour, but still impressed. Carbonation is a little lower than I'd like but I prefer that to a beer being over-carbonated. It's an earthy spicy saison with a bit of tartness and a surprisingly luxurious mouthfeel. The nose is rather clean for the style and the bitterness is rather robust. It could almost be a pilsner except for the lack of hop aroma and bubblegummy yeasty esters that linger on the palate. The Goldings really express themselves in this beer giving it a near English IPA hop quality. I would have liked something a little less bitter for this time of year, so I may dip into my stash of saison from last year. I also still have some Kölsch, Bière de Garde and Bière de Juin (which turned out hoppy, but not bitter, like this beer.
Posted by Marc at 8:22 PM No comments:

The saison-style beer that I brewed a few weeks ago has been bottled. I ended up adding some BE-134 yeast to speed up the fermentation. The Wyeast 3724 slow down but I think I was just impatient after previously fermenting a beer with the BE-134. The orginal gravity 1.047 fermented down to 1.004. This was 91.49 percent attenuation and  5.64 percent alcohol by volume. I bottled after the beer stayed 1.004 for four days. There's definite Dupont character with this beer so adding the BE-134 didn't overwhelm the Wyeast 3724 character. The fermentation seemed to stall at 1.018, but again, I think I was just being impatient. The fermentation temperature started at 82 and I ramped it up to 90 after a few days to try and speed up fermentation. When it seemed to stall I piched the BE-134 and dropped the temperature down to 80. This was all done using the Brewjacket Immersion Pro.

Brewed a saison today with six pounds of Briess pilsner DME, one pound of Caravienne malt, East Kent Goldings and Aramis hops fermented with Wyeast 3724 (the famous Dupont strain.} I boiled two ounces of Aramis hops for an hour and one ounce of the Goldings for 20 minutes. I steeped another ounce of Goldings for about 30 minutes starting at 150 degrees. The brew session went well except for miscalculating the evaporation rate. Topped off the fermenter with a little too much water to almost six gallons so I missed my intended original gravity by 10 points. I have the Tilt hydrometer going and the gravity is 1.047 and the temperature is 70. I have the Brewjacket Immersion Pro set to 90F which is supposed to be the outside temperature for the next two days. This will be the first time using the Immersion Pro to raise the temperature to roughly 15 degrees above ambient room temperature. I haven't been able to get the Tilt 2 app for the hydrometer logging correctly. Not sure why. Might try using my other tablet to see if I get better results. Eventually I would like to set up a Tilt Pi.
I'm drinking some of the Japanese Sunshine that I brewed 14 months ago. This a saison-type beer that I make with 70 percent pilsner malt with 30 percent rice. I didn't use rice this time and instead used a William's  liquid malt extract that is 70 percent two-row barley and 30-percent corn. I replaced the Sorachi ace hops with Polish Lubelski and then I got wild and added lemon and sweet orange peel and fermented it with Wyeast 3724 which got stuck, so I added some Wyeast 3711 dregs. It's turned out pretty good, buti is perhaps a touch too sweet.
Posted by Marc at 8:18 PM No comments: 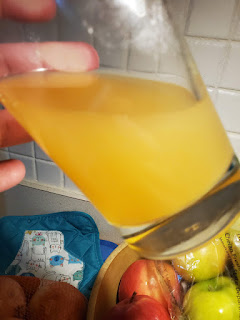 Earlier this evening I bottled my most recent batch, which I'm now referring to as Bière de Juin. It has turned out to be a very spicy, very pale ale. The BE-134 yeast is a monster, taking the beer from 1.043 to 1.004 in about five days. I've bottled on the eigth day of fermentation and the beer is 90 percent attenuated. I feel like this yeast would have fermented more if had not used a portion of wheat. An all malt beer would probably be even drier. The BE-134 yeast throws a tone of esters. It is POF+ in a very big way with pronounced clove flavor and aroma at bottling time. There is a background peppery note which is suitable for saison but so much clove is almost off-putting. We'll see if it dissipates with time, but I'm ont sure I would use this as my primary yeast for a saison. As a secondary yeast it could help to fully attenuate a fermentation and could add some complexity without hitting the drinker over the head with clove. With that said, I think it could be good for more of a winter saison with additional spices or Grand Cru type Belgian-style strong ale,. I'm probably going to keep using my trusted liquid strains for Saison; strains such as Wyeast 3724, Wyeast 3711 and Omega Saisonstein's Monster.
Posted by Marc at 9:11 PM No comments: